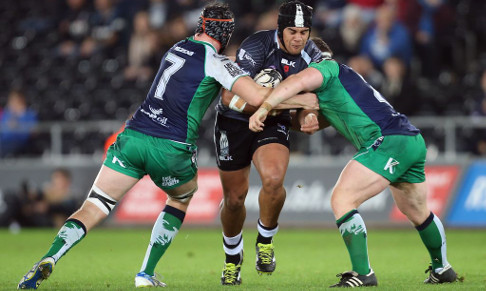 At the heel of the hunt, a 15 point loss to the Ospreys is unlikely to be a talking point, when the season review starts in May 2015. This wasn’t a defining game in Connacht's season nor was could it be looked upon as points dropped but it still rankles, it still raises some worry questions and it could yet be a foretaste of some less promising days ahead.

The Ospreys are a play off bound side, they are a title contender, this was their seventh win in as many outings. Very few sides will win at the Liberty Stadium this season and that certainly goes for the Llanelli Scarlets, Dragons, Edinburgh and Cardiff all of whom are Connacht's main rivals for a top six place.

Yet here was an opportunity all the same, here was a team missing seven front line players to the Welsh international squad and without a host of talented back row options leaving them down to two strong flankers in Sam Lewis and Justin Tipuric and a three under 21s including last minute loanee from Cardiff Ieun Jones.

The Ospreys were vulnerable and two minutes into the second half a Connacht side that had lost just once in six previous Pro 12 outings, looked like they might take advantage of that as they led 6-3 and were dominating in the scrum. It wasn’t a case of the westerners being worth the lead, they weren’t, the main first half try scoring chances had come from the home side but was the case that in a broken, disjointed and flat contest, Pat Lam's side had got their noses in front.

Having found their way to the summit, the young Connacht side failed to hold their composure during the backlash despite having a real platform to exploit their opponents. That platform came from a strong scrum and a close to full strength line up with Bundee Aki looking sharp in the early stages of his début before breaking down with cramp in the second half.

During a disjointed and ragged 15 minute spell for the westerners, the home side scored 23 points without reply and had this game wrapped up by the 60 minute mark. It was the second week in a row that Connacht entered the final quarter of a game in ‘damage limitation’ mode. That’s a big turn about from what we saw in the first seven games of the season.

While the Ospreys will review this as a game where a much beleaguered squad dug deep after a poor first half and put their interior opponents very much to the sword, from the Connacht point of view the game turned on a mismatch in defense and one costly lapse at scrum time.

During half time, the BBC Wales dressing room cameras showed Osprey’s coach Steve Tandy dissecting some of the problem areas on the big screen as the players looked on. it emerged afterwards that they had resolved to target some backline mismatches that were developing and were looking to attacking Connacht in midfield on second and third phase. It worked, Rodney Ah You was exploited by a Dan Evans break and Connacht were carved open with Hassler’s try on 46 minutes.

The scoreline was at 13-6 when the most important turning point arrived, the Connacht scrum had bulldozed their opposing eight on 43 minutes to win a penalty which Ronaldson nailed. It was a hugely positive moment and a major confidence boost but Tandy acted quickly, replacing veteran Duncan Jones with rising Moldovan star Dimitri Arhip and he was the right man to catch Ah You off guard.

The Connacht tighthead was being watched very closely in this one after Nathan White’s unfortunate injury in training, a big performance would have propelled him into selection contention and by the 43rd minute he would have secured a perfect ten on the report card. Alas, international caps aren’t earned on such a short time period and his second half showing might well work against him.

The Arhip scrum was the only scrum of the game where Ah You got caught but against a new loosehead he was outfoxed and sent backwards. The Ospreys got their penalty, as one, the home team and supporters acclaimed their front row. Game set and match right there. Every other Connacht scrum before that point rendered meaningless by what might well have been a lack of concentration considering their dominance to that juncture.

The Osprey’s weren't done, replacement centre Ashley Beck marked his return from injury by setting up the second try for Martin Roberts. Another penalty extended the lead and while Connacht eventually breached the try line in the closing stages through Eoin McKeon, it was rendered a consolation by Ronaldson’s missed conversion which could have given them a shot at a losing bonus.

The 48th minute scrum might have been pivotal to the defeat but the errors went far beyond a couple of miss tackles and a bad scrum. The attacking play was patchy and lacking support runners, Ronaldson had two clear breaks in the game and failed to pass, Aki should have been taken off when pulling up with cramp early in the second half as on a subsequent break he pulled up for a second time negating a potential two on one overlap.

There were loose kicks, bungled lineouts and there was the whole issue of the breakdown where the Ospreys had an edge all afternoon and used it as the platform for their second half revival.

Above all else, the game ultimately boiled down to a brief period relentless attacking play from a largely second string Ospreys side with a handful of world class additions in Tipuric, Lewis, Beck and Hassler making Connacht pay. The performance levels have dropped in recent weeks and that will be a concern heading into the two week break before Zebre visit on November 21st.