"A whole lot to work on" 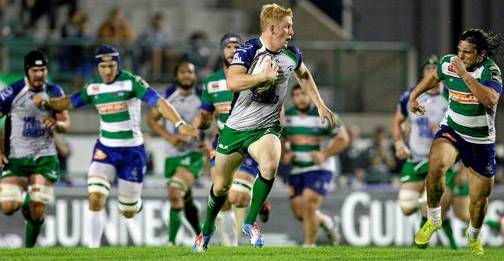 By Rob Murphy at the Stadio Monigo in Treviso

The numbers on the scoreboard at full time were almost irrelevant in Treviso on Friday. A simple letter ‘W’ beside Connacht and ‘L’ beside Treviso would have sufficed. In boxing parlance, this was a 13 round professional bout, the only thing it lacked for was referee David Wilkinson standing on half way at the end holding both captains by the wrist, ready to declare a winner by lifting one arm in the air.

Connacht won on count back at the atmospheric Stadio Monigo. They slugged it out and went the distance. Landing punches and taking punches. Falling back onto the ropes before fighting back into the centre and repeating this dance over and over again during the course of a game that felt 100 minutes long.

It was compelling for its raw intensity alone, you had to have a vested interest for sure, to everyone else, this was very much in the dour category but for those involved with Treviso and Connacht this was a huge juncture in their respective seasons. The home side had to win after a nightmare few months, the visitors had to win if all the hard work that had gone before was to be filed under ‘credible progress’. No one cared by what means.

On the face of it, here was a Connacht side stumbling to victory against the league’s worst team who had zero points coming into the contest but in reality, Treviso’s plight needs more context. They are an improving force and had this as their most significant target of the entire season so far. So it is hugely encouraging that Pat Lam’s ever evolving young squad figured it all out in the end.

The story of this game is one of flashes and cameos, exciting moments and little nuggets that defined the game and the performance. It isn’t a linear tail of a topsy turvy contest, such a review would leave one none the wiser about the events that transpired. The ‘how’ and ‘why’ of this victory is a difficult puzzle to solve so let’s just focus on some definites.

Craig Ronaldson kicked three penalties to help Connacht to victory. The side’s were locked together at 6 all at half time and once again, the westerners showed why they are proving to be one of the league’s most impressive second half teams conceding not a single point after the break and this despite withstanding a huge amount of pressure.

The first quarter had been dominated by Connacht but four visits to the home 22 in search of an early big blow had yielded nothing in terms of tries so by the half hour mark, even though Treviso had offered very little of a threat, this contest felt like it would go the distance. The knockout blow wasn’t on the cards.

The second half started and finished with Treviso in charge thanks solely to their eight forwards - the misfiring backline played a big part in their undoing. Davide Giazzon at hooker was a bundle of energy, Matt Luamanu a powerful presence at eight, Alessandro Zanni showing all of his 81 caps of experience at seven. They had a game plan to stifle Connacht, it was working and they were growing in confidence as a result in possession.

In between the home side’s dominance, Connacht did just enough with some sharp counter attacking inspired by the electric Darragh Leader (who deservedly nabbed the man of the match crown), clever positional kicks from Ronaldson and the extremely well poised Jack Carty at ten. The outcome of their endeavours was field position. The hosts had to start from their own 22 and with a callow and sluggish back three, they offered no threat.

It all proved just enough but the final four minutes of play were far from plain sailing. Connacht hung on by their fingernails as the hosts went on a late surge to get within inches of the try line. They were repelled, Dave McSharry played a key role at one point, Aly Muldowney’s steal at the back of a lineout on the last play was even more important.

It was a game where little moments that might be missed in a more open contest became central parts of the story. A game where technical precision and normally hidden essential plays actually get the recognition they deserve. Here are a few of them.

Shane Delahunt made his first start at the age of just 20 and three days after getting an academy contract. The young Birr born hooker who has played for Kilkenny Colleges, Leinster elite underage squad and the Irish under 20s jumped at his chance, connected with almost every lineout and was powerful in open play.

His moment came in a second half scrum for Treviso where the Connacht front row held their ground, then gained an inch and he hooked the ball against the head superbly when the opportunity arose. His performance was augmented by Dave Heffernan who replaced him and added ball carrying skill and a thunderous few tackles to the mix.

Another moment came from replacement Willie Faloon who came on at openside for 20 minutes and wreaked havoc with a dangerous Treviso back row. On 75 minutes, Connacht had possession but Eoin McKeon looked to have found himself isolated, Faloon had to prevent three Italian forwards from bridging the ruck, he didn’t just prevent, he cleaned out holding his ground superbly.

Then there was Robbie Henshaw sprinting back to collect a loose fly hacked ball in his own 22, turning to face three Treviso pursuers, sidestepping the first two, spinning free of the third’s tackle before making ten vital metres and allowing his retreating teammates to get around him.

Games like this, help lift the lid on work like that mentioned above, McSharry, Muldowney, Delahunt, Faloon and Henshaw were not the only ones to land such body blows. We could have picked ten more.

Standing outside the Connacht dressing room it was clear that a pressure was now lifted, the first phase was done, Europe will offer a chance to breath and enjoy their rugby again. To fix the problems and improve. This after all was a three point scrappy win away to the league’s worst side.

It doesn’t herald great things again but it is a piece of a jigsaw that slots into a picture which we can’t quite make out yet but we are starting to feel it might just be a little special. Beyond all that, the pugilist’s story is invariably one of either win or bust and the spoils went to the westerners here, one defeat in six, 18 points and fifth in the Pro12 table with a whole lot to work on.