The Sky is Full of Pies 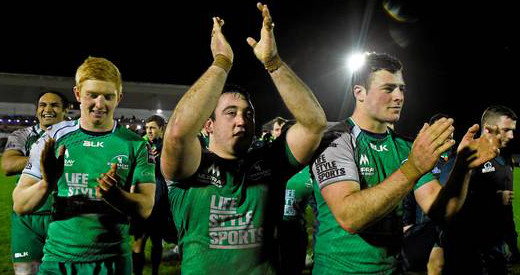 By Rob Murphy at The Sportsground

In many ways this season is starting to feel like it has reached ‘pie in the sky’ territory for all involved with Connacht rugby, but before the first half of this remarkable campaign is incorrectly dismissed as nothing more than a brief foray into an unknown world, let’s take stock of a campaign that has seen Connacht win 10, draw 1 and lose just five of their 16 fixtures so far, remaining unbeaten in eight home games.

This New Year’s Day victory at a sold out Sportsground was just Connacht’s second against Munster since 1986. It marked a seventh Pro12 win of the season, meaning that with ten games still to play in that competition, the westerners are just one win shy of their all time record of eight victories. To cap it all, the win helped notch up four more points in the standings to bring them to 32, just three shy of last year’s season total of 35.

All that is compelling evidence that there is substance behind the latest splash of favourable headlines, but the real meat in this season’s story can be found with a little further digging into the tale of Thursday’s eight point. This was an inter-provincial win with a real difference, a full strenght opponent, a nightmare start (conceding 13 points) and then 65 minutes of almost complete domination by a superior Connacht outfit. Yep, the sky is full of pies.

In rugby, the coin toss happens outside the dressing rooms an hour before kick off and usually away from the media eyes but Thursday was an occasion when everyone wanted to know who won it, and what way did they decide to play? The wind had been howling all day, the rain lashing, all coming from the Bohermore End down the field to College Road end. It would be significant.

Connacht won it, and the unflappable and inspirational John Muldoon and his comrades were in no doubt what they wanted. They chose to play into the elements, to trust their defense and play on the fact that they are as good as any side in this league after half time this season. They just needed to make sure they were within striking distance.

By the 15th minute, they would have been forgiven for losing faith. Munster had started like a juggernaut. Peter O’Mahony and Paul O’Connell each had won big penalties at the breakdown, the sort of colossal moments that get 30 seconds of slow motion replays on the big screen. Bursting into rucks, powering over the top, clasping the ball, staying on their feet and waiting for the whistle. World class stuff.

Each big turnover put Connacht on the back foot, and the other world class aspect of Munster’s game then came into the fray as their lineout and maul went to work and easily powered over against one of the league’s most potent units in terms of maul defence. O’Mahony got the touchdown and this was a major early statement.

Ian Keatley kicked well in tough conditions using the wind superbly and at 13-0 on 15 minutes it all seemed to be going to plan. However, Munster would barely have the ball in Connacht’s half from that point to the the 75th minute, as the home side, infused with the confidence Pat Lam has instilled in them, never wavered from their plan.

The tries and scores that followed have been replayed time and time again over the last few days. Marmion’s score the highlight for so many reasons. A well placed grubber kick from Robbie Henshaw put Munster on the back foot, a brilliant one handed lineout take from Eoin McKeon secured possession before Craig Ronaldson’s neatly executed dink over the defence released the electrified Henshaw who had a supporting scrum half on hand to finish the move. That score against the wind on 30 minutes was the main turning point in the game.

The margin of nine at half time still seemed significant but within a handful of minutes it was down to two, after man of the match Henshaw scythed through the cover with Bundee Aki, as ever, in tow ready to take it on. Dannie Poolman’s clearout at the breakdown paved the way for Ronaldson to burrow over for try number two.

By the 62nd minute the scoreboard was totally in Connacht’s favour. Miah Nikora had replaced the injured Ronaldson - whose selection in the ten role proved a masterstroke for the type of game that developed - and slotted a three pointer, Marmion had made a trademark break from a scrum to set up a surge on the line where Aly Muldowney drove over with the likes of Willie Faloon, Quinn Roux and even Mils Muliaina playing key roles in clearing the goal line rucks.

A night not to be forgotten then, crowned by the goal line stand in the final five minutes. Connacht’s replacements epitomised the spirit and commitment of the performance. George Naoupu made 11 tackles in just under a half hour, rookie Ultan Dillane came on and didn’t look a bit out of place making seven tackles and pouncing on a loose ball for a key final turnover.

On Saturday, Pat Lam was on a national radio show espousing the virtues of a collective work ethic and a core identity that relates to the west of Ireland people his team represents. He talked of Robbie Henshaw’s development in a team where he’s often on the back foot, which merely challenges him to improvise, create and lead, helping make the case for why this team can continue to play a key role in his international development long into the future.

It is probably apt that the origin of our introductory phrase hails from a workers rights song in the early 20th century, a parody of the Salvation Army hymns that eulogised the virtues of keeping your head down and accepting your lot in this life, in lieu of the ‘pies in the sky’ that would await if you did just that. The song rebuked such logic, using satire to inspire a ‘strive for more’ mentality.

Under Lam, Connacht are striving for more, looking to maximize what they have, the IRFU backing has helped, the key signings have added the missing link of experience but its the continuing flow of new home grown talent into this squad that is truly astounding. The squad now has sense of belief like never before. Get busy living is the motto and they’re thriving.