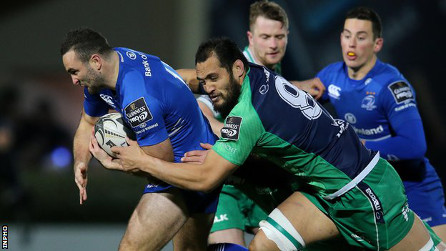 By Rob Murphy at the RDS

The expected performance didn’t materialise on Friday night in our nation’s capital. As a result, everyone in the Connacht rugby family went home feeling a little deflated. They might have even somewhat foolish after a week of talk about upsets and ending the ridiculously long 12 year run without a win on this island beyond the River Shannon.

Leinster brought the artillery and their European Cup intensity levels to the contest and it saw them through a game that was topped and tailed with tries from Shane Jennings and Zane Kirchner and rubber stamped with another example of why they probably have the most impressive defensive alignment in European rugby. They were worth the win.

And yet, despite the gloom, game 14 of Connacht’s season still managed to provide us with plenty more examples and evidence of the huge strides the team continues to make. This even with a a final result that felt all too similar to previous trips to Dublin 4 over the last decade. Close but yet so far, once again.

One of the key positive elements in the performance was the manner in which Pat Lam’s side turned the tide after a dreadful first 20 minutes where they had a mere 17% of possession, shipped seven penalties, a yellow card and eight points. When you consider it, eight points was scant return from all that for Leinster, but Connacht had the wind at their backs too.

The second quarter however saw the men in green come to life in a manner that you don’t usually associate with Connacht sides. This ability to change the momentum or the storyline of a game mid contest is totally new and a huge affirmation of the stronger mental resolve that the team carry, they had made it back to 8-6 at halftime and probably should have led.

Three visits to the home 22 yielded two penalties but Jack Carty had missed a straightforward kick midway through the half while Leinster defence had somehow held firm on their own line twice before the visitors came within a half inch of a try after a brilliant crossfield kick from Carty and an acrobatic catch and touchdown from Poolman who, unfortunately, had half a stud on the endline.

The first half ended with Tadhg Furlong becoming the game’s second player to receive a  yellow card along with Aly Muldowney before half time but far from wilt, Leinster grew in confidence on that concession, kicking six points after the break to go 14-6 ahead before the tighthead returned. The wind was causing Connacht problems and their game plan against it was questionable.

And yet, the final salvos saw the westerners rise again when all seemed lost. Hard work at scrum time earned penalties to give them a platform. The kicked to the corners and the catch and drive from one of 13 perfectly executed lineouts on the night saw George Naoupu make up for an error strewn night with a try to bring his side within three. Carty’s kick tailed just wide but with five minutes to go, Connacht had a chance.

The response from Leinster was impressive at the breakdown. They continued to pounce on errors and force turnovers. Jamie Heaslip nabbed a key one, Jordi Murphy another before a kick to the corner from a penalty with two minutes to go led to try number two as Matt Healy rose to tap the ball back and prevent it finding touch only for his teammates to freeze and Zane Kirchner to charge through and score.

It was one of a number examples of Connacht switching off on a night which marked their biggest test of the season so far. That element of the performance will be a major concern for Pat Lam. There are other areas too that might keep the Connacht management team from concentrating on the Christmas cracker jokes but won’t have them pressing any panic buttons all the same. Here’s a list.

1 - Mils Muliaina’s performance. The All Black legend has already delivered so much, he’s infused belief among the younger players, rehabbed his injury on schedule, played a key role in three home wins against opponents they simply had to beat but this was a big step up on Friday and while his high error count could in part be blamed on conditions and a one off, he did look a step behind on a few occasions.

2 - The elements of the performance that were completely out kilter with the season to date. While Connacht have yet to produce a complete 80 minute effort during the campaign, some areas of their game have been consistent in the opening 13 encounters. Basic handling error for example. On Friday the error counter was alarmingly high. A total of 13 unforced mistakes to Leinster’s 3 in such a key fixture.

3. The lack of direction in possession, Connacht are crying out for more carries from forwards. Direct carries close to the breakdown, to create more space out wide. Perhaps Jake Heenan’s return in the spring could add to this but for now they just didn’t get enough in this area. Had George Naoupu turned big gains into clean possession rather than multiple knock-ons perhaps that could have worked.

In brief, nothing was lost at the RDS at the weekend, problems emerged perhaps, but there is time to deal with them. A defeat in Ulster will extend the run of games without an away inter-provincial win to 38 in over 12 seasons but once again, ground won’t be lost in the race for the top six.

Away games against the league’s top five teams, Ospreys, Glasgow, Ulster, Leinster and Munster will not define the season or the team. It’s the home games against those side’s that will be critical to a top six finish. Munster at home on January 1st is looming, Connacht probably need an improvement on this effort in Ravenhill for the sake of momentum going into that fixture, if they get that then they’ll be on track.