Below an Acceptable Standard 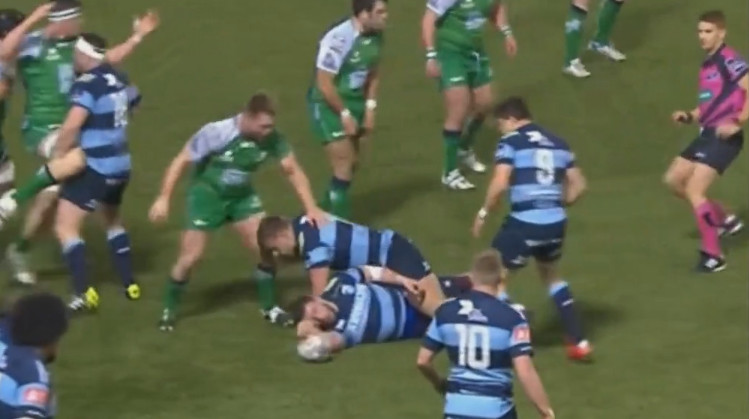 The Pro12 competition is a lot better these days, every game seems to matter that little bit more this season. Friday’s tussle at the Arms Park was a fine example, Cardiff won the game with a last minute try that won’t be forgotten by the club’s supporters for quite some time. That same score, Connacht players and management crestfallen at the sight of three vital points slipping through their hands.

The sense of despair soon turned to outrage towards the officials, as two dreadful calls cost Connacht dearly during the final flurry. A period of play that started with a baffling decision by the visitors to kick the ball down field to the Blues with 90 seconds and finished 68 - penalty interrupted - phases later with a try for the home side.

Those four penalties during the nine minutes of desperation helped keep Cardiff alive in the contest as for most of the attack, they were aimlessly going back and forth across the field with Connacht making tackle after tackle, replacements Ronan Loughney, Jack Carty ad Eoghan Masterson were among the heroes here.

The 84th minute penalty in the sequence was the most disputed one, Pat Lam’s ire was such that he decided to take a laptop into the press conference to clearly illustrate how bad a call it was. Touch judge Leighton Hodges was the decider, he spotted hands in a non existent ruck, having missed a blatant knock on, and the fact that no ruck had formed.

A ridiculous call, neatly illustrated by Lam’s unusual decision to bring some video evidence to the media scrum more than a half hour after the game had ended. Yet, the coaches clever work in that regard might well have been undone by the rest of the press conference, as he then raised a previous incident involving Welsh official Hodges that seemed out of context with events that had transpired on the evening.

At this point we really need to get to grips with the entire reality of the game rather than the reality of those last few minutes. The Connacht team and management were right to be fuming about a couple of the final decisions. The standard of officiating at a key point was pathetic at best, referee Lloyd Linton and the much maligned Hodges made calls that were below an acceptable standard.

Yet in the previous 80 minutes, their officiating was hardly the talking point in a game where Connacht’s first half dominance had not been reflected on the scoreboard. Rodney Ah You was enjoying arguably his best ever game in a Connacht shirt, dominating at scrum time and making some big hits in broken play. His scrum work was reeking havoc.

Connacht led 10-3 at the break thanks to a Jake Heenan try from the back of a rampaging maul but they should have had more, three fruitless visits to the home 22 proved costly. The most notable of them came at the very end when Connacht had won a free kick from a Cardiff scrum five metres from the home line.

Those who rested easy for a second safe in the knowledge that Connacht would take the scrum in that situation and cause untold damage watched in horror as the otherwise on song George Naoupu had a moment to forget, taking a quick tap and go while the rest of his team were standing still. It unsurprisingly ended in a turnover.

After half time, Cardiff seemed to get a lift from the reprieve and dominated for 25 minutes or so. Ah You’s early second half injury was key in that regard, forced off with what looked like a dead leg. The advantage at scrum time was gone and the Blues slowly turned the screw with Joaguim Tulcelet scoring their try and the boot of Rhys Patchell putting them 11-10 ahead with just 15 minutes remaining.

The responses from Connacht was hugely encouraging, leading to one of the best tries the provincial team has conjured up all season, especially when considering the venue, the time on the clock and the importance of the fixture. The ever impressive Aly Muldowney powered over to score after a long spell of incessant pressure.

The leadership in the team at that point was clear, the likes of Danie Poolman, Matt Healy, John Cooney, Craig Ronaldson, Tom McCartney, Mick Kearney and John Muldoon all to the fore at a vital moment. Cardiff and their supporters were genuinely stunned into silence as Ronaldson added the extras. Connacht teams of the past would not be coming back at them like this.

Then came the errors, long before the officials got involved in proceedings Connacht had their own failings, Muldoon and Loughney got their wires cross on the most important restart of the season so far after that try, that turned possession over.

Yet still, Connacht got it back with 90 seconds left only for Ronaldson to kick it downfield from his own 22, when a six point lead seemed to demand ball retention and composure. He also burst out of the line in defence not long after, looking for an intercept and leaving a gap in behind. Two moments that didn’t reflect an overall good game from the Kildare native but were indicative of Connacht’s failings.

From that point, for sure, the officials got in the way of a Connacht win but any feelings that Hodges had it in for Connacht need to be balanced with the fact that he told the referee to award a first half try to Tiernan O’Halloran despite a clear pull in the back of an opponent. Hodges was saved by the TMO on that one and the fact that he stopped the game in the second half to draw attention to Cardiff foul play. Hardly the actions of an official who might have bias.

Then again, Pat Lam will say he wasn’t suggesting Hodges was biased, he’ll say that to the disciplinary committee who have called him in to explain a post game press conference where an alleged comment by Hodges to a steward at the Sportsground in January was also raised.

Time will tell if Lam regrets that part of the post game press conference to the assembled media but his honest and frank assessment of the decisions should still be commended in a world where such reviews are usually droll and defensive.

Drawing attention to sub standard officiating is probably necessary but the balance needs to be made with the fact that Connacht’s play at key junctures in this game was also sub standard. Twice in one season Connacht have led Cardiff in injury time only to cough up a try. It has cost them a total of five league points and if they fall short of sixth by that margin or less, the memories will sting. They’ll only have themselves to blame.