A contest to remember 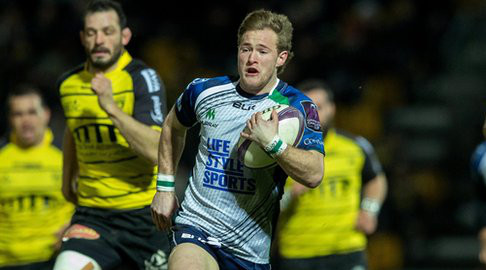 There is no way of placing value on the mental element of the game of rugby. The know-how. The knack. The nous. You can stick computer chips in jerseys, place 15 cameras in every corner of the ground and read statistics until your eyes fall out. You can master all the data, safe in the knowledge that it will make a difference, but there will always be a part of the game that is unquantifiable.

On a cold, crisp January evening, one Atlantic coast team met another in La Rochelle and they played out an enthralling duel that defied the reality of this competition, which plays second fiddle to the domestic competitions for almost every entrant.

Sure, Connacht were carrying knocks, down key front liners, even forced to rest one or two players despite still being in contention for the qualification. Sure, La Rochelle had kept up to 12 key players on the sidelines in anticipation of a big game next week but once all that was put to one side, we got a contest to remember. A cup tie. A battle.

And so, the circumstances were right for more learning, for the accumulation of more experience, for solidifying an inner belief within this squad of players that - despite the injuries, the size differentials and the low squad numbers - they now have the knack, the know how and the nous to get out of tricky corners, to negotiate choppy waters and to dig out results when the odds are stacked against them

The clock was ticking, 75 minutes had been played. Connacht trailed by 20-16 and while they had been more than competent in the second half, after an error-strewn first 40, the try scoring opportunities remained scarce. They needed a win first and foremost but a bonus point would guarantee a last eight spot. Two tries seemed highly unlikely but even one was looking beyond them.

Up steps Niyi Adeolokun, just one appearance since October but an exciting talent, eager for another chance. He had six minutes to make a difference when he came on for Mils Muliaina, in the end he just needed one touch and about six seconds to turn the game on its head with a swerving side step to the left to deceive a drifting defence and a searing burst of acceleration to pop through the gap and shoot clear.

The try rocked La Rochelle and seconds later they were floored. A short kick off saw Matt Healy alive to the plan, he got a boot on the ball and sprinted in behind the defence to collect on half way before chipping the full back, hacking on and winning the race to the corner for the touchdown and a fifth try on the season. For La Rochelle the game was gone in 60 seconds, for Connacht the quarter finals beckoned and the ever blossoming belief that they, as a team, are never beaten cemented in the minds. Try measuring that.

Sure, there is a realisation that even winning this competition doesn’t secure a European Champions Cup spot and the top six in the Pro12 is where the season will be defined. For the diehard followers, this testing Easter weekend trip to Gloucester in between huge fixtures away to Munster and at home to Ulster - who will both have plenty of time to crack open the Easter eggs while the European action continues - feels like a distraction.

However, the notion that any team emerging from years of mediocrity can pick and choose when to play and when to ease off while still progressing and improving in key games is daft. The mental side of the game would suffer and while Connacht managed resources to field a fully changed side in Bayonne in December, the wins achieved by that team and by the side that took to the field in La Rochelle on Saturday, must be invaluable to the squad’s inner self belief.

The result was a third successive victory in France matching the Irish record set by Munster between 1999 and 2001, it means that Connacht still haven’t succumbed to three successive defeats at any point this season and after a very poor first 40 minutes  - where they trailed by 20-11 and had seemingly picked up where they left off in the previous two weeks - it marked a return to form for most of the players on the field for the first time since the New Years Day Munster match.

Connacht had started with an explosive try, made by the brilliance of Matt Healy with a chip over the defence, a catch and offload to Kieran Marmion but that was as good as it would get in that half. La Rochelle’s Jean Pascal Barraque kicked six points before Nathan White saw yellow for two penalties in 60 seconds and the depleted Connacht scrum wilted on the line conceding a penalty try.

Jack Carty notched two penalties but just before half time, a kick down field bounced in front of Samoan flying Alfoa Alfoa and while Connacht hesitated, he snatched the ball beat four defenders and set up a try, finished off by marauding No 8 Albien Meron.

The half time team talk must have been animated to some degree, Connacht started the second half with a much more composed and tight game plan, nabbed a neat Eoin McKeon try from a crafty short lineout and defended resolutely for all of 15 minutes after that before building towards that finale.

The technical analysis certainly played a part, forwards coach and new Ireland Wolfhounds head coach Dan McFarland pointed to his captain John Muldoon for the credit for the try from the lineout. The Portumna man had spotted a weakness in the La Rochelle set up close to their line while numerous players pointed to Pat Lam for credit for the final try as he had said all week that he wanted them to go for another try immediately after scoring having spotted that the hosts over pursued on restarts.

All of that is clever stuff and it makes a difference but not in isolation. The likes of Danny Qualter, Conor Finn, Adeolokun, JP Cooney, Dave Heffernan and Caolin Blade were all on the field for the dramatic comeback here and not coincidentally in Bayonne too.

They knew what was possible and never wavered from the task. Oh, and one final point, the captain for the day was Mils Muliaina, his form might not be vintage and it is a concern but can anyone conjure up some evidence that he isn’t having a major impact on the self belief of these young players? Didn’t think so.