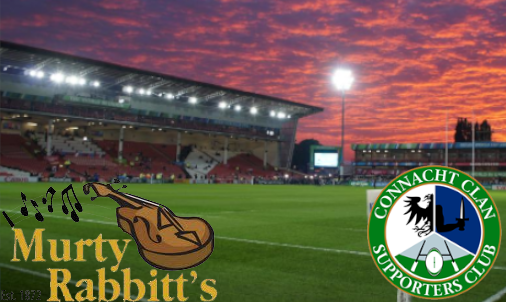 And we're back to European Rugby! Connacht take on the mighty Gloucester in the next round of the European Champions Cup this Sunday in Kingsholm! 1.00 p.m. kick off, all the action will be shown live in Clan HQ, Murty Rabbitts.

If you are travelling to the match, be sure to head on over to the Clan Website for up to date travel news and details! If you're not heading, be sure to join us in Murytys. Don't forget to pick up your tickets for the Over The Line Rugby Special, to be held in Murtys on the 12th, in association with our friends at GBFM. All proceeds to Galway Hospice! Sure to be a great night, but tickets are limited to get yours in hand soon!

Bazzo replied the topic: #67025 1 month 1 week ago
I actually had no problem with the reffing overall. Just think wasting 1+ minute off the clock in the final 10 mins when there's a team camped on the line trying to get at least one point is absolutely ludicrous! Nearly as bad as how naïve we were at running the clock down ourselves.

As for the scrum, didn't really have an issue with it overall. So much skullduggery goes on at every scrum that it's really a matter of pinging the first/main infringer. Going forward absolutely doesn't mean that your team is in the right.. pretty sure a couple of calls came from the AR anyway.

Sol_ie replied the topic: #67020 1 month 1 week ago
Can't put too much blame on the ref, he missed things on both sides. I do think that there were a few points where a marginal decison went against us (that Fitzgerald pass was flat - just about!) and they always stick out when you're chasing a game like we were. I think the only out and out 'wrong' decision was the decision not to give the try - looked to me that we were in control and the ball properly grounded. Equally, could see being up in arms if that try could've been awarded against us but still rankles.

I thought our counter-rucking in this game was excellent, really made them work hard for it. The conditions were awful from what I could see, and I do think that we worked better in those constraints.

Shame that Marmion wasn't available to start/come on for Blade. Tempo of the game did dip a bit when Kerins came on - more to do with Blade playing so well as opposed to any criticism of Kerins.

A bonus point loss would've been a very deserving result all in all. Going to be a tough run of games to qualify out of the group - but we knew that.

King Prawn Bhuna replied the topic: #67017 1 month 1 week ago
Agree about the ref. he was shocking for both sides, both sides can pick out incidents but the worse thing was refereeing of the scrum. He didn't have a clue and it just ran the clock down.

Good to see the numbers the that came over, hope you had a good time despite the early start on a Sunday. Looking forward to the reverse fixture this weekend see you Friday lunchtime...hope that Murty Rabbits is doing the two for one again this trip....

Amsterdamage replied the topic: #67016 1 month 1 week ago
Thought we had the rub of the green more than once through the course of the game from the ref. Disappointing he missed Butler being held in the rook as that was a turning point: next phase yellow card and tries followed....
Our decision-making in last 15 was infuriating, you need 16 to win (2 tries converted + pen) or (1 try converted + pen) bonus point, why not kick the pen and have 10 mins vs 14 men to get the try(tries)??? Also, why waste 60 seconds multiple times with scrums? Take the maul line out!!

Bazzo replied the topic: #67014 1 month 1 week ago
Wasting a full minute off the clock trying to find the right number to yellow card was infuriating too!

phatguerilla replied the topic: #67013 1 month 1 week ago
Disappointing result. I feel like when we play in England we get sucked into playing the oppositions game when really we need to move them around the pitch more like the big French teams.

One thing that bothered me, and its not even the individual refs fault, but a problem with the game, is there was a high tackle and a no arms tackle on our guys in quick succession metres from the try line, but no card and nowhere near a penalty try. Now I get that no ref would currently give a penalty try but Lloyd was probably in if that high tackle didn't happen imo, or at least its a quicker recycle and probable try on the next phase. Similarly in the last 5-8 minutes they were allowed slow the game down repeatedly and not penalised enough imo. Maybe the ref could have carded sooner, I know twelvetrees got carded eventually, but its just a part of the game that really annoys me. I guess Glou were pretty cynical in general when you look at the penalty against Butler who was held in the ruck by his sleeve. I think at times this season we've played some really good rugby but maybe in danger of being too honest/naive for the most part, we have no answer imo at least, to teams that are getting away with crap like that.

ShaneM wrote: For anyone travelling to Gloucester, Spartans RFC has invited the Clan to Join them for a beer or 2 on matchday!!! Could be fun (2 mins from Kingsholm)

Also, we have received a food discount of 20% for Cafe Rene (Late BAR!!) They have told us that they will be showing the H-Cup matches on Saturday if anyone's interested and about..NOT LONG NOW :wooh1oo:

For anyone traveling, which stand are you going to?

Most are headed to The Shed. covered terrace......

ShaneM wrote: For anyone travelling to Gloucester, Spartans RFC has invited the Clan to Join them for a beer or 2 on matchday!!! Could be fun (2 mins from Kingsholm)

Also, we have received a food discount of 20% for Cafe Rene (Late BAR!!) They have told us that they will be showing the H-Cup matches on Saturday if anyone's interested and about..NOT LONG NOW :wooh1oo:

For anyone traveling, which stand are you going to?

ShaneM replied the topic: #67009 1 month 1 week ago
For anyone travelling to Gloucester, Spartans RFC has invited the Clan to Join them for a beer or 2 on matchday!!! Could be fun (2 mins from Kingsholm)

Also, we have received a food discount of 20% for Cafe Rene (Late BAR!!) They have told us that they will be showing the H-Cup matches on Saturday if anyone's interested and about..NOT LONG NOW

overstrander replied the topic: #67006 1 month 1 week ago
Slightly worried about Porch at fullback.

Sol_ie replied the topic: #67004 1 month 1 week ago
Not exactly a happy hunting ground for us. Can't wait to see the teams. Injuries has lessened a bit - we have not a bad run of games for a team that was seriously depleated.
Read More...