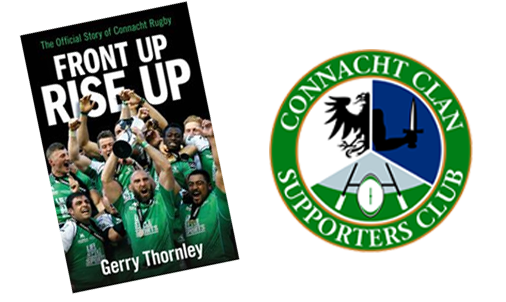 We'd like to let our members know that Gerry Thornley will be signing copies of his new book, Front Up Rise Up, The Official Story of Connacht Rugby, tomorrow at 11am in Eason, Shop Street, Galway. If you can't make it there, Gerry will also be signing copies again in on 1st December at  6.00 pm in Eason, Athlone.

The Connacht Clan are delighted to announce that we have a number of copies of Gerry Thornleys new book, as prizes for our members! For details of  the raffle click on thro.

One copy of Front Up Rise Up will be raffled to a member of the Clan. No need to do anything. If you're not yet a member sign up above.

One copy of Front Up Rise Up will be raffled to one lucky person who likes and shares the following https://www.facebook.com/ConnachtClan/posts/1407569462606218 on Facebook!

One copy of Front Up Rise Up will be raffled to a person who posts in the relevant forum topic on the Clan Forum!

Gerry Thornley has been the rugby correspondent of the Irish Times since 1997 and is a regular contributor and rugby analyst on both television and radio. His previous books include Trevor Brennan: Heart and Soul which won the William Hill Irish Sports Book of the Year in 2007 and the bestselling Ronan O'Gara: Unguarded (Transworld Ireland, 2013).

Discuss this article
Log in to comment
Posts in discussion: Front Up Rise Up - The Official Story of the Rise of Connacht Rugby

DerenSensei replied the topic: #50249 3 years 7 months ago
I'm with bannerman. Don't know much about The history of Connacht Rugby but I've been trying to learn as much as possible.

bannerman replied the topic: #50248 3 years 7 months ago
I don't know much about connaght rugby history this is probley
just what I will have to read
Read More...