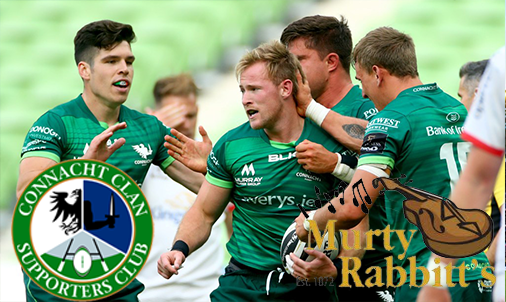 It's back to Pro14 action after two weeks forced time off due to Covid concerns! But Connacht are back in action this weekend, taking on Scarlets in the Sportsground! Join the Clan, but only virtually!!

Betty Swallocks replied the topic: #67937 5 months 4 weeks ago
Selections were strange. It's possible Andy was told only to play Marmion for half a game by Andy Farrell, but if not then there's no way he shouldn't have started, particularly in the conditions with n o Caelan Blade available. This was a home game against a conference rival which means we should also have started Aungier with Kenny on the bench. Finally, I just don't get why Arnold is being selected in front of Farrell. Farrell is superior in every aspect of the game and we looked better when he came on, which was also too late.

DeadStraightStare replied the topic: #67935 5 months 4 weeks ago
Tough game to watch. Couple of tries coughed up due to the immense amount of rain.

It's been a long time since I have seen Mat Healy beaten for speed on the outside, not to mind twice in one match.

Still good to see we were generally the better team. Bit of luck would be handy one of these days.

Sol_ie replied the topic: #67934 5 months 4 weeks ago
Not a great result. On the positives, I thought Papali'i was immense - he seemed to break their lines everytime. Ultan and Boyle had some great carries too. Tempo increased significantly when Marmion came in. To be fair to Reilly, it's not the kind of game that Scrum Halves love, especially for your first start! Jack didn't have a stellar game, which didn't help.

Worst thing was that it was a game that we should have had in the bag. Not trying to shift blame from our lads, they know better than anyone what the conditions can be like at home, but there was two certain tries that were knocked on before the line not counting even Buckleys try (which he was full sure he had). We had the chances, just didn't finish them.

Scarlets looked average, I thought. But they converted the chances they were given and didn't try and overplay.

It's frustrating that it's an inter-conference game. Munster looking strong in our conference so far. Frustrating.

CONN8 replied the topic: #67933 5 months 4 weeks ago
Really disappointed. We left that one behind us.

ShaneM replied the topic: #67932 6 months 6 hours ago
After all this we are now getting a status yellow wind warning! Or as it used to be called a typical winters evening in Galway!! Need the win tonight

Sol_ie replied the topic: #67930 6 months 1 day ago
Looking for this hope, hopfully there's not some last minute set back as the last two weeks. Fingers crossed our lads (and the rest of us!) remain healthy! COME ON CONNACHT!
Read More...