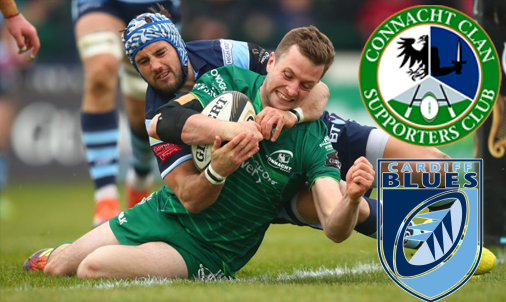 Back to Pro14 action as Connacht take on Cardiff in the Sportsground this Saturday. Cheer our lads onto victory as we get down to the closing stages of the Pro14 season!!

ShaneM replied the topic: #68064 2 weeks 18 hours ago
10 tries in 13 Matches. Great to see a player get a chance and take his opportunity #Finisher
Agree with Sol_ie. Need to get him signed on a permanent deal.
Hopefully we'll hear some good news on the contract front for him the rest of the team. Tis getting late in the season for contract renewals!!

Massive 5 pointer for us. A bit of breathing room for us and also clawing back in Munster (by 1 point

)
What was you opinion on the Ref's performance on Saturday. Wasn't too pleased with it - had a gander over on welsh Social Media after the match and they were in meltdown over his performance!!
They seemed to miss most of my issues with him

Sol_ie replied the topic: #68063 2 weeks 18 hours ago
Need to get that man tied down. Sounds like he's happy where he is, so fingers crossed he'll be in the SG for a while!

Great result! BP win is a BP win. Wootton (as Conn has said) adds so much, good to see AP have a real positive impact. Lovely to see a maul try!

Sol_ie replied the topic: #68059 2 weeks 3 days ago
Feels like a million years since we had a connacht match. Things just that bad for Irish rugby, seems like!!

Must win for us, but very strong team out. Looking forward to see what the best out half in the country (thanks for that BOD) can do.
Read More...